DSSCs are composed of a wide band gap semiconductor sensitized by a dye absorbing in the visible spectral region and have reached an efficiency exceeding 12%. The efficiency of a DSSC depends on a variety of kinetically competing charge-transfer mechanisms. The rate of each mechanism depends on the energy levels at the interfaces, the materials used, their morphology and preparation conditions as well as the chemical interactions between them. 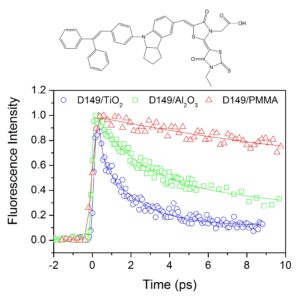 We are interested in studying the electron injection dynamics from the dye sensitizer to the oxide semiconductor substrate using femtosecond spectroscopy. We have investigated the injection dynamics from the very promising organic sensitizer D149 toward TiO2 nanocrystalline substrate as well as in various inert environments to understand the fundamental photodynamics of this dye. 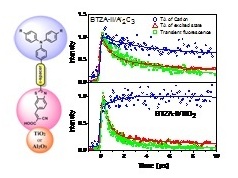 Al2O3 films by means of fs transient absorption spectroscopy in the visible with white-light probe. A new series of promissing organic sensitizers has been used bearing tri-phenylamine as electron donating grroup and benzothiazole as electron acceptor. We have found that cations are generated in both substrates meaning that electron injection is operative not only in TiO2 but also in Al2O3. The latter is used as a reference substrate and electrons are considered to be injected to trap states. Also, faster recombination of injected electrons takes place in Al2O3 dye-coated films as observed through fs transient absorption in the visible and IR.

Another issue that should be taken into account is that the photophysics and solar cells efficiency of organic sensitizers comprising a cyanoacrylic acid group are greatly influenced by an equilibrium between the neutral (”non-deprotonated”, COOH) and anionic (“deprotonated”, COO–) forms, whose ratio depends on the solvent polarity and its H-bonding properties, dye concentration and temperature used. 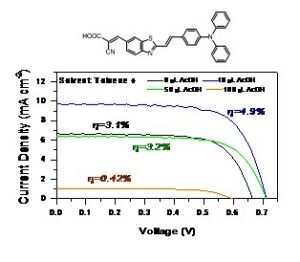 In a paper of ours published in JPCC, we report a detailed investigation on the relationship between the portions of COOH and COO– dye forms and the photophysical and solar cell properties of an organic dipolar sensitizer, BTZA-II, bearing triphenylamine electron-donating and benzothiazole electron-withdrawing moieties. The photophysics has been studied by stationary and time-resolved fluorescence spectroscopy in apolar and polar solvents with a dye concentration ranging from 5´10-7 M to 5´10-5 M, also upon addition of small amounts of an external acid or base in order to change the solvent acidity, allowing us to distinguish the contribution and lifetime of the neutral and anionic form. Also, solar cells using a solid-state electrolyte were prepared from toluene and toluene+acid solutions. A significant increase of the solar cell efficiency by 58% (η reaching a value of 4.9%) has been achieved after addition of an appropriate amount of acetic acid into the initial BTZA-II dye solution.

Organic solar cells are becoming very attractive for cost-effective alternatives to Si-based photovoltaics as they offer potential for large-scale and inexpenssive manufacturing on flexible plastic substrates. Bulk heterojunction organic photovoltaics in particular are the subject of an extensive research effort. Towards improving their efficiency anode and cathode interlayers are being used for efficient transport of charge carriers after the dissociation of the electron-hole pair (exciton). 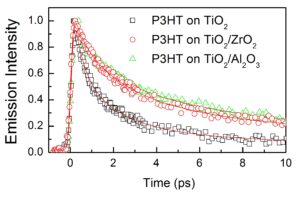 We are interested in studying the ultrafast dynamics of P3HT and of the dissociation of excitons in bulk heterojunctions composed of P3HT-PCBM with various interlayers. In a recent paper published in Adv. En. Mater. Al2O3 and ZrO2 ALD metal oxide substrates have been used to pasivate surface trap states of TiO2 films used as cathode interlayers. A clear increase in exciton lifetime is observed when P3HT and blend films are deposited on TiO2/ALD substrates which means that the effective photocarrier lifetimes are also increased.

In a paper published in Org. Electronics we investigate the optoelectronic properties of a donor- 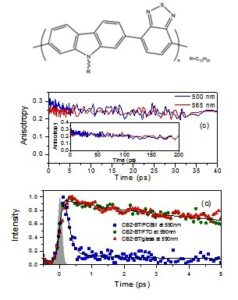 acceptor poly(N-Dodecyl-2,7-carbazole-alt-benzothiadiazole (CBZ-BT) copolymer in solutions and thin films. Absorption spectroscopy revealed two bands at 322/338 and 445/475 nm for CBZ-BT in solutions/films attributed to the carbazole and benzothiadiazole groups respectively. Time resolved spectroscopy in solutions reveals a transient red-shift of the emission spectrum within less than 5 ps due to exciton migration and/or conformational relaxation of the polymer backbone. In films, this relaxation is faster accompanied by a quenching of the exciton lifetime. Fluorescence depolarization in solutions follows the rate of spectral relaxation. In films, the overall depolarization is faster leading to a reduced limiting anisotropy, due to efficient energy transfer to adjacent chains with different polarization of the transition dipoles and increased disorder in the solid state. An almost complete quenching of the copolymer fluorescence, taking place on ~ 150 fs, was observed upon blending with a fullerene PC70BM acceptor pointing to an efficient electron transfer.

The realization of supramolecular multi-chromophoric structures with fixed separation and orientation between the chromophoric building blocks is the structural basis for maximizing chromophore communication – through donor/acceptor electronic energy transfer phenomena.  – while thwarting concentration quenching. These structural features would allow the direction of the electronic energy flow between distinct spatially organizing pairs to be dictated by tailoring the electronic transition-energy gaps of the donor/acceptor chromophoric building blocks.

In this topic, we are interested in studying the photophysics and photodynamics in such systems with fs spectroscopy in order to determine straightforwardly the excitation energy transfer rates involved in the above supramolecular multichromophoric arrays. For example, we have studied the rhomboidal structure shown which is composed by a pair of tectons – the Bodipy 1 (donor) and the Bodipy 2 (acceptor). We have also studied the guest-host system in 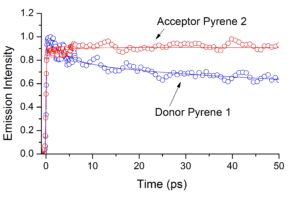 which a tetrasulfonated derivative of pyrene has been incorporated within the cavity of the rhomboidal structure. We have found that energy transfer between the bodipy tectons takes place within few ps. Additionally, the pyrene derivative directly transfers energy to Bodipy 2 within a few 100 fs. 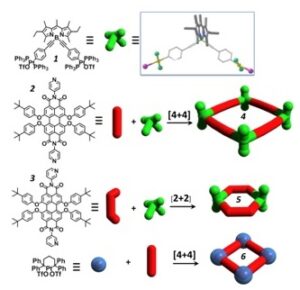 In a recent paper we have studied the photophysics of self-assembled polygonal hosts where bodipy chromophores are placed at the corners and are aligned perpendicular to the plane of the polygonal formed by perylene bisimide chromophores. Energy transfer 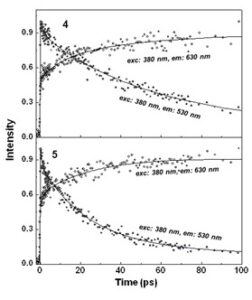 Multichromophoric systems with energy donor-acceptor chromophores attract tremendous scientific and technological interest as prototype materials towards understanding how energy is captured and selectively transferred to specific centees. Excitation energy transfer (EET) plays a crucial role in such systems as it is the fundamental phenomenon by which the energy harvested by molecular antennae systems is funneled to lower energy acceptors where secondary photochemical/photophysical phenomena take place. 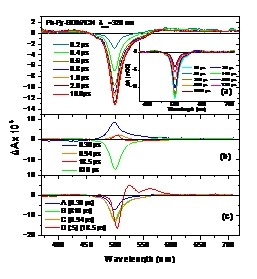 In collaboration with the group of Eric Vauthey, we have studied the photophysical properties of two pyrene-bodipy molecular dyads, composed of a phenyl-pyrene (Py-Ph) linked to the meso
position of a bodipy (BD) molecule with either H-atoms (BD1) or ethyl groups (BD2) at the 2, 6 positions, by stationary, nanosecond and femtosecond spectroscopy. Excitation of the Py subunit eads to emission that is totally governed by the BD subunits in both dyads and in both dichloroethane and acetonitrile, pointing to excitation energy transfer (EET) from the Py to BD chromophore. Femtosecond fluorescence and transient absorption spectroscopy

reveal that EET takes place within 0.3-0.5 ps and is mostly independent of the solvent and the type of the BD subunit. The EET lifetime is in reasonable agreement with that predicted by Förster theory. After EET has taken place, Py-Ph-BD1 in DCE and Py-Ph-BD2 in both solvents decay mainly radiatively to the ground state with 3.5 – 5.0 ns lifetimes which are similar to those of the individual BD chromophores. However, the excited state of Py-Ph-BD1 in ACN is quenched having a lifetime of 1 ns. This points to the opening of an additional non-radiative channel of the excited state of Py-Ph-BD1 in this solvent, most probably charge separation (CS). Target analysis of the TA spectra has shown that the CS follows an inverted kinetics and is substantially slower than the recombination of the charge-separated state. 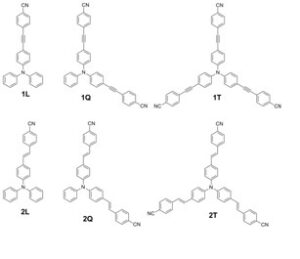 In a recent paper published in PCCP, we have studied the photophysical properties of two octupolar (T) molecules and their linear (L) and quadrupolar (Q) analogues by means of steady state and femtosecond to nanosecond spectroscopy. The compounds bear triphenylamine donor, cyano acceptors and acetylenic (series 1) or olefin (series 2) π-bridge. In the octupolar compound of series 2 (2T), fluorescence is emitted from an excited state localized on a single branch while in that of series 1 (1T), the emitting state is delocalized among

branches pointing to a reduced excited state polarity. Excited state dynamics in series 1 has shown an increase of lifetime with solvent polarity. In the branched compounds of series 2, multiexponential dynamics in polar solvents are exhibited indicating a distribution of emitting geometries. Femtosecond anisotropy in 1T indicates, an incoherent excitation transfer on few ps, in agreement with the hopping time predicted by the Förster model. However, no hopping mechanism is observed in 2T possibly because of an increased intramolecular charge transfer leading to a low energy relaxed excited state localized on a single branch. 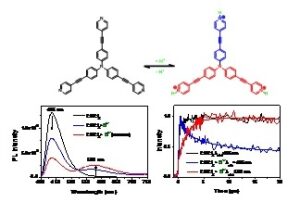 In another article published in J. Phys. Chem. A, a comparative study of the photophysical properties of octupolar pyridyl-terminated triphenylamine molecule, with its quadrupolar and dipolar analogues by means of ambient and low temperature steady state spectroscopy and fs to ns time resolved fluorescence spectroscopy was reported. The push-pull molecules bear triphenylamine electron donating core, pyridine peripheral electron acceptors and acetylenic π‑bridge. The samples were studied in solvents of varying polarity and also upon addition of small amounts of acetic acid to induce protonation of the pyridine group. All samples exhibit significant positive fluorescence solvatochromism as well as a relaxation of their excited state to a solvent relaxed Intramolecular Charge Transfer state on the ps timescale. For the octupolar compound, excited state relaxation occurs simultaneously with excitation energy hopping among the branches. The hopping time is solvent polarity controlled since it becomes slower as the polarity increases. The experimental hopping times are compared to those predicted by Förster and Fermi formulations. The samples are capable of emitting broadband light covering almost the whole visible spectrum by careful control of protonation. Energy transfer from the neutral towards the protonated species on the 1 ps timescale is revealed.

Photophysics of quantum dots in solution and solid films

In recent works, we have investigated the optical properties of CuInS2/ZnS QDs. CuInS2 QDs are 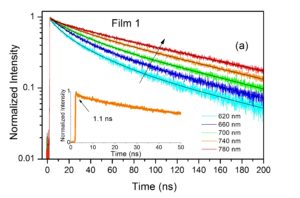 non toxic and enable their application in Biology and Medicine. In solutions the QDs exhibit a red-shift of their absorption and photoluminescence spectra by increasing concentration and solvent polarity. In addition, they exhibit a three-exponential decay with time constants 1-3, 20-40 and 200-300 ns, depending on solvent, concentration and detection wavelength. In 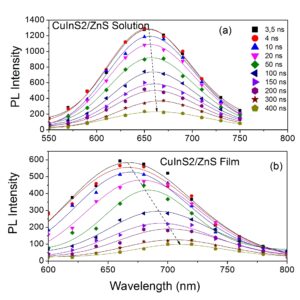 films, a red -shifted photoluminescence spectrum is observed for films made by drop-casting compared to those prepared by spin-coating. The timeresolved photoluminescence decays in films, apart from the three mechanisms observed in solutions, exhibit also a fast decay component of < 1 ns, which is more pronounced in the spin coated films and especially at long emission wavelengths. The presence of larger aggregates was found to lead to a larger PL red-shift. Besides, as the degree of aggregation increased, the PL decay became slower. We attribute the observed PL red-shift in solid fims to energy transfer from the smaller to the larger dots within the aggregates.