The development of materials displaying high two-photon absorption (TPA) has attracted great interest in the past decade due to a variety of potential applications in photonics and optoelectronics, such as three-dimensional optical data storage, fluorescence imaging, nonlinear optics, microfabrication etc. TPA, due to its its quadratic dependence on excitation intensity is spatially confined in a very small volume provides a means for activating chemical or physical processes with high spatial resolution in three dimensions.

We are interested in examining the TPA properties of novel organic molecules with long pi-conjucation length. These molecules are of the type D-pi-A, D-pi-A-pi-D or D-(A)3. For example, in a paper published in J. Org. Chem. the TPA cross sections have been determined for a series of tri-branched molecules based on a tri-phenylamine core and benzothiazole electron withdrawing groups (EWG) at the periphery coupled (or not) to an additional EWG. We have investigated the effect of the additional EWG and of the polarization of the benzothiazole moiety on the TPA properties.

In a  recent article, in Org. Lett. the TPA properties of novel D-pi-A-pi-D molecules bearing a 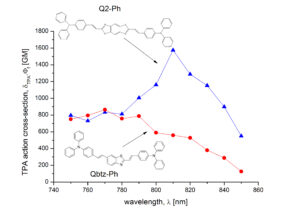 benzobisthiazole electron accepting core and various electron donating edge groups have been studied both theoretically and experimentally. The theoretical computer-aided study has been used as a pre-screening of chromophores with the highest TPA activity. We were interested in whether the introduction of a second thiazole ring onto photochemically stable, pi-deficient benzothiazole might offer a useful design strategy for enhancing TPA. It is found that the fusion of the second pi-deficient heteroaromatic ring to the central electron-accepting benzothiazole core does not necessarily lead to TPA enhancement and may even have a detrimental effect on the NLO response. However, excellent TPA properties have been observed from a benzobisthiazole-based chromophore with TPA cross-section > 1600 GM, accompagnied with high fluoprescence quantum yield. 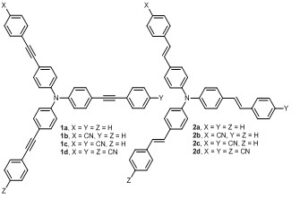 In an article published in ChemPhotoChem assymetrically substituted star-shaped molecules with gradually varied number of peripheral acceptors were investigated by stationary, time resolved spectroscopy and two-photon absorption fluorescence. Although star-shaped molecules with identical branches, having D-(p-A)3 or A-(p-D)3 arrangements, are a well-known class of materials with enhanced non-linear optical properties, surprisingly, very few works have been published on star-shaped compounds with different 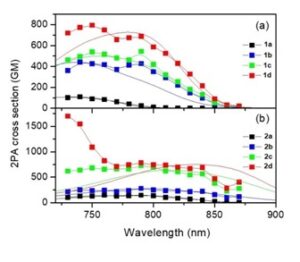 branches or different acceptors so far. It was found that 1) Linear absorption spectra are mostly dependent on the number of attached cyano groups and p-linker composition, 2) Shape of the spectra is affected by the chromophore overall arrangement (linear, quadrupolar and tripodal), 3) Fluorescence spectra and fluorescence dynamics revealed that polarity of the excited state depends significantly on the chromophore substitution/arrangement being higher for the one CN-substituted molecules 1b/2b; fluorescence quantum yields are affected similarly, d) The highest 2PA cross-sections as high as 800/1700 GM were found for the tripodal molecules bearing three CN acceptors 1d/2d.

“Photophysics and two-photon absorption of a series of quadrupolar and tribranched molecules. The role of the edge substituent”, M. Fakis, I. Fitilis, S. Stefanatos, P. Vellis, J. Mikroyannidis, V. Giannetas and P. Persephonis Dyes and Pigments 81 (2009) 63-68.

In addition, we have used TPA photopolymerization for the direct development of 3D

microstructures. TPA photopolymerization is widely considered as an important technique for direct, maskless and three-dimensional microstructuring of suitable TPA resins. It is also an appropriate technique for fabrication of biocompatible microstructures for medicine delivery and medical examination. We have used fluorene TPA sensitizers and a diacrylate monomer. A spatial resolution of ~ 300 nm has been achieved with a TPP threshold as low as 1.4mW (average power).

It has been recently shown experimentally that two-photon absorption in graphene is an extremely intense phenomenon. Besides, graphene is an ideal memory material because of its transparency, conduction properties and solution processability. It is within our reserach interests to investigate the creation of defects onto graphene, after illumination by a focused femtosecond laser beam and then to optimize the procedure in order to develop a novel 3D optical data storage memory. In a first step, using our fully-automated 3D direct nanofabrication system using fs laser pulses, we examine the generation of defects on chemically deposited graphene on the top of Si/SiO2 substrate. The fabricated samples are characterized by SEM imaging as well as Raman spectroscopy. Detailed Raman mapping of graphene took place before and after the laser illumination using a laser excitation of 514nm and a 100x objective lens. The Raman spectrum of pristine graphene consists of two distinctive features, known as G and 2D peaks. The presence of defects gives rise to another two features, D and D` peaks, which initially are forbidden in non-defected graphene as a result of Raman selection rule. The defected areas exhibit much higher I(D)/I(G) ratio compared to the non-defected ones indicating successful generation of defects. Defects of different sizes can be obtained by varying the exposure time at relatively low laser power levels. SEM images verify the size and shape of the defected areas.